Not much so far has been given away regarding Jared Leto’s portrayal of the new Joker in Suicide Squad but in an interview with Empire, Leto has shed more light on his role as the crazed anarchist..

“There was definitely a period of… detachment,” he said. “I took a pretty deep dive. But this was a unique opportunity and I couldn’t imagine doing it another way. It was fun, playing those psychological games but it was painful, like giving birth out of my prick-hole.”

Leto also stressed the importance of making the role different “If you don’t break rules, you’re not going to strike new ground,”. Director David Ayer also backed this up “There’s a power to that character and by some freaking miracle, through the incredible things Jared has done and the photography and all the other things that went into it, we’ve cooked up something transcendent. He’s scary.” 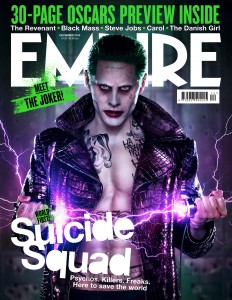 Suicide Squad will crash onto our screens in August 2016.