Over the Christmas break, Marvel fans were wondering if Santa Claus had brought them an extra special present with rumours abound from TheWrap that next year’s Logan was reportedly going to feature an appearance from Deadpool (aka Ryan Reynolds) opposite Hugh Jackman. The report suggested that Reynolds had filmed a scene for the film which Deadpool 2 helmer David Leitch had directed and amongst all the presents and merriment, the internet went nuts.

But word from both Reynolds and Logan director James Mangold were quick to shoot down the report suggesting it was “fake news” and nothing else. On his Twitter, Reynolds remarked: “Sadly not true. Prison 24601 is on a solo mission” while Mangold followed up with “For everyone freaking out, The Wrap is dealing in fake news. Chill.” 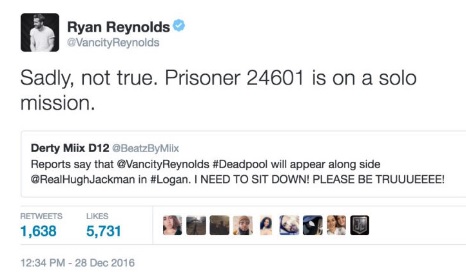 So those rumours may be false after all. But if there’s one thing we have learned over the years is that not everything in film, particularly when it comes to comic-books and superheroes, is what it seems. Watch this space.