Early reviews have arrived for Fifty Shades Darker and they’re not looking good. It’s fair to say that most critics weren’t fans of the original, 2015’s Fifty Shades of Grey, and now they’re once again tearing into the latest film of the franchise.

Many outlets are yet to release their reviews but from the ones that have so far, the film is being labelled “bland” and “drippy”. Its early Rotten Tomatoes score reflects this: 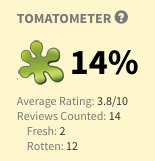 And here’s some of its dodgy ratings so far:

The Hollywood Reporter and The Wrap also didn’t warm to it much, although surprisingly Guy Lodge in Variety seemed to like it much more, writing: “For all its structural and psychological deficiencies, it’s hard not to enjoy ‘Fifty Shades Darker’ on its own lusciously limited terms.”

You can decide for yourself when Fifty Shades Darker hits theaters tomorrow, watch its trailer below in the meantime: