Bringing this much-loved British classic to the big screen is fraught with the sort of dangers that Captain Mainwaring and his plucky band of merry men would normally run away from.

From endless repeats on TV, to its evergreen popularity, Dad’s Army is a sitcom that has aged beautifully (with the possible exception of a few Corporal Jones references to the ‘enemy’). The adventures of a group of men, all of whom are not serving on the front line for various reasons, and instead form the Home Guard to protect Britain from the potential invasion of the Germans.

We’ve seen big screen adaptations of small screen favourites fail spectacularly, so we asked the men behind the movie what it was that motivated them.

“The characters were what drew us to the project. They are wonderful and their relationships are so rich that it was then about creating the story. We didn’t want to make 90 minutes of the TV show, we wanted to make it cinematic. We had to develop the characters to match that format and experience. When I got those elements together, that’s when I handed it over to the director.“

Experienced screen writer Hamish McColl was sat next to the director in question, Oliver Parker. The pair have worked together before, and the filmmaker shared his concerns about taking on the project.

“It was a poisoned chalice when it arrived… and now it’s even worse!” he jokes. “I had to read it, because Hamish wrote it and we’ve worked together before very fruitfully. He did an incredible job, I thought. It was rooted in the original world but it also evolved to have a proper scale. He brought in the women and the spy element. The whole heroic finale, which is denied on television because they can’t change too much from the norm, all these things gave it that cinematic potential. Then we also add that fantastic cast to the mix.“

The stars taking on the iconic roles are recognisable actors from the old guard of British Cinema. There is also a welcome dash of Hollywood glamour in the form of Catherine Zeta Jones.

Hamish: “I think, because he is the leader of the platoon, that Toby Jones as Mainwaring had the biggest boots to fill. He was also the actor we both really wanted to do it. He has great instincts. Once we knew he was on board I felt deeply reassured that he would nail it.“

Oliver: “It’s very difficult, I think, to get that right tone for the comedy. When it was filmed in the late 60’s into the 70’s, it was leisurely. The point is that nothing can actually happen in a hurry. We have a different appetite for it now. We had to retain that but make it crisp and include actual jeopardy. There is a proper threat going on out there.“

The biggest addition to the cast comes in the form of the mysterious outsider Rose Winters. Both Mainwaring and his posher second in command Sergeant Wilson (Bill Nighy) fall for her charms. What was it like bringing an A-Lister like Catherine Zeta Jones into the mix?

Hamish: “I wanted something to come between Mainwaring and Wilson, a relationship we all love from the show. I felt a glamorous woman arriving in Wormington on Sea would be a great way of forming a bizarre love triangle. She just happens to not be what we think she is, and Catherine brought that edge to the movie.“

Oliver: “She was a tremendous addition to our cast I have to say. In some ways she is liberated as the character doesn’t exist on television. She can create from the ground up and she absolutely does. She so embodies that 40’s style in a way that it feels like she could have been working back then. She was a wonderful contribution and her approach was fantastic. Coming in from New York and not part of that initial team but she just dived in and literally dived into the Atlantic waters in the final scene. She really got our schedule and ready to go. The great thing is how she never tries to steal any of the comedy. She wins a lot of it, but by playing it with a perfectly straight bat she makes it intoxicates those around her.“ 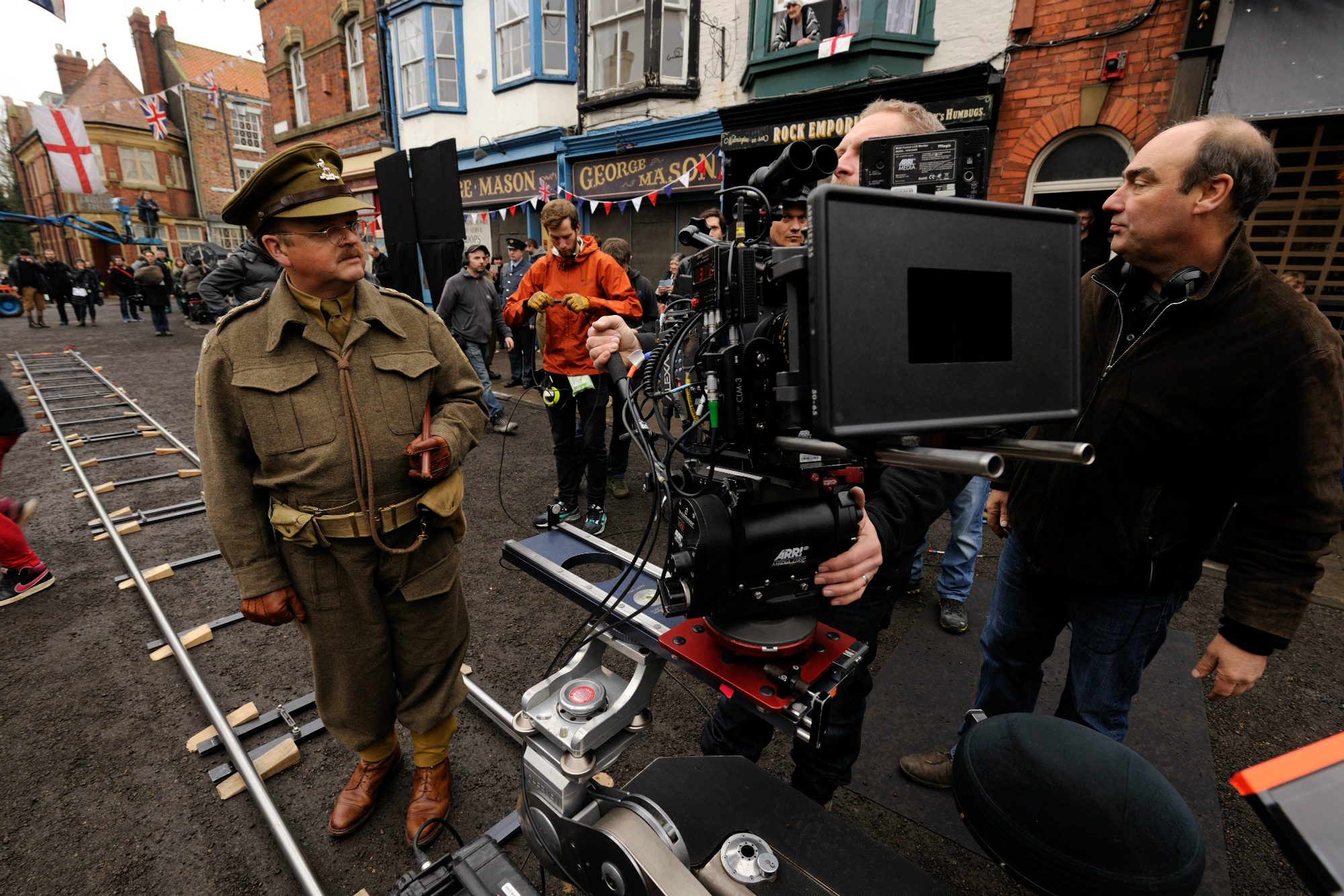 We [the audience] learn very early on that her character is in fact the German spy that the story centres on. Was there ever any thought given to making that a mystery throughout the film, or did you want that reveal as soon as possible?

Hamish: “I’ve learnt in comedy, if you want to hold information back, it tends to live more in the genre of ‘thriller’. You need to know what the comedy is playing off. We tried different things, but we both knew it had to be sooner rather than later. The revelation is not the point in the comedy. We needed to see these men thinking one thing and not knowing it at all.“

Oliver: “In one version we even had us seeing her as a spy earlier. We found out who she was before she even arrives in England. That version worked quite well, but it was so much to set up that we only had a short amount of time to meet the platoon. As you say, the real comedy comes from us being so far ahead of those chaps who are fawning all over her.“

How well do you think the audience will know these characters already and how do you go about appealing to those who may not know them at all?

Oliver: “Well its not particularly popular in America. Our intention is that is might be… We’ve made a concerted effort to create a film that stands on its own two feet. We had the parameters of starting it in London with that chase set up and then ending on the beaches with a heroic climax. We set up that whole story and had all the characters of the main platoon have a journey of their own. We’ve seen people already who haven’t seen the series who have got the film, so that’s a good sign. It does vary though, and it is quite insular. Sometimes, the Americans love things like Benny Hill and Downton Abbey, and this has the British extremeness. We do have that cast, that everyone knows, and that may well be the ultimate way in.“

Hamish: “I did see all of it, which is quite a lot, before I started writing. Some elements more than others stood out as reference points. There is nothing specific I took, but there are a couple of touchstones that were very deliberate. They act as a sort of compass. I did have some very stark uses of the catchphrases, and I think I have to than our director for taming those.“

We’ve spoken about the journey the characters undertake, and how dramatically that differs from the show. Does this leave them as changed men moving on, and as such how would that affect them in potential follow-ups? Where would we pick up?

Oliver: “Well, Star Wars have copied us a lot… [both laugh]. I think there are countless prequels to do because we’ve used the end of the war for this film. We could even have the post-war years… the wilderness years!“

Hamish: “We toyed with an idea where you saw footage of the Home Guard parading through London at the end being thanked by the King and the crowds. It was very touching and I loved it being rooted in history, but we haven’t done that and left them on duty. It’s a comedy and you want to see that platoon together. You would be looking earlier I think, as Oliver said.“

You can follow the adventures of Captain Mainwaring and his men when Dad’s Army is released in cinemas nationwide this week.