Assassin’s Creed has only just hit US theaters but it’s already not gone down well with many, especially critics.

The video-game to movie adaptation is directed by Macbeth‘s Justin Kurzel and stars Michael Fassbender in the leading role. However, a great filmmaker paired with a great actor doesn’t seem to have worked out on this occasion as critics have been slating the film. This is epitomised by it’s low score of 19% on Rotten Tomatoes: 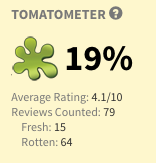 As films that are critically scrutinized tend to perform poorly at the box office, we won’t be surprised to see Assassin’s Creed make loss on its near $200 million budget.

Unfortunately, we weren’t too keen on it either, as you can see in our written review and our spoken discussion of the film in our podcast: