Annabelle: Creation, the fourth movie in The Conjuring series, took top spot at the US box office in its opening weekend. The film grossed $35 million, replacing The Dark Tower to claim first place, with the latter dropping to fourth.

Christopher Nolan’s Dunkirk held second place with $11 million, while The Nut Job 2: Nutty by Nature debuted in third with $9 million. See the top 10 below via Box Office Mojo: 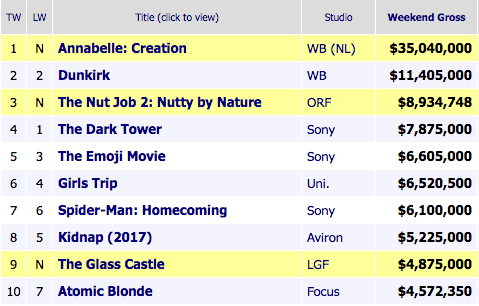 Although an impressive debut, Annabelle: Creation is actually the lowest domestic opening of the franchise: