After pretending to fire Dawn in The Office for stealing Post-It notes, the receptionist turns to her crestfallen, attention-seeking boss David Brent, and calls him a “sad little man”. Three words that perfectly sum up this tragic comedic creation – and yet that’s exactly why we feel so endeared to him.

Ricky Gervais’ most popular character is set to grace the silver screen for the first time in Life on the Road, as we catch up with Brent as he takes part in his long-awaited tour, taking his band Foregone Conclusion around a series of dingy, mostly empty bars in the South West of England. Barely anybody turns up; the band don’t like him (he even pays for them to have a drink with him); and he remains single, lonely and idealistic. But that’s who he is, and it’s what makes for a character that has allowed for us to invest in, emotionally, across the past 15 years – and it’s a technique in British comedy that is tried, tested and triumphant.

Whether it’s Basil Fawlty or Alan Partridge, it’s that sense of failure we can relate to

Naturally, we’re drawn to a story of the underdog, there’s nothing abnormal about that, it’s the reason why Rocky was given plenty of sequels – and is still going strong today in the form of Creed – for we can’t help but root for those nobody expects to come out on top. Whether it’s Basil Fawlty or Alan Partridge, it’s that sense of failure we can relate to; the flaws that humanise them; the imperfections that make them just like you or I. Even those perceived to be winners, those in the position of power, be it Father Ted to Dougal, or Del Boy to Rodney, Blackadder to Baldrick, or Mark to Jez – part of the beauty to these dynamics is that the former character is equally as pathetic as their counterpart; as much of a loser as those they spend time with. 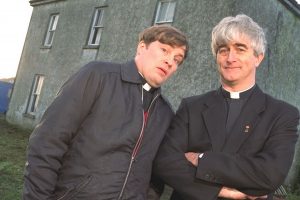 Father Ted and Dougal – as bad as each other

But when comparing this to American comedy, the differences are palpable. Even the Brent counterpart, Michael Scott of the US Office, he’s more quirky than tragic; funny for being outlandish rather than inadequate. Understatement is never exactly something the Americans have thrived in though, whereas in the UK it sets the tone, and precedence, for sitcoms to flourish from; it lays the foundations for the narrative to be built upon.

David Brent is the head of a paper merchant in Slough; Alan Partridge has a show on North Norfolk Digital in the middle of the morning. In America, Friend‘s Ross is a successful palaeontologist, whilst Rachel works for Ralph Lauren. Larry David is effectively playing a fictionalised version of himself in Curb Your Enthusiasm – a mega-rich writer living out in LA. In The Fresh Prince of Bel-Air, Uncle Phil’s pad is gigantic. Frasier isn’t doing too badly for himself either. They promote and perpetuate the American dream – it’s ingrained into the fabric of American culture and is reflected in their outpour of comedy shows. 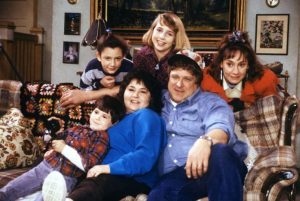 It’s not a general rule of thumb, of course, just take Roseanne, which aired first in 1988 – a rarity, for it depicts the working class in America, those on back foot, which is seldom seen in the sitcom genre in that country. It felt unique for it was rare, but in the UK filmmakers like Ken Loach and Mike Leigh have been thriving in the kitchen-sink drama their whole career. Perhaps Britain’s inclination to project our own lives back to ourselves follows on from our relationship with cinema during the Second World War, where British films revelled in the notion of realism. Suddenly the public didn’t want the glitz and glamour of Hollywood endeavours – there was a need to see the harsh severity of the real world on the silver screen. 1942 was the only year in British cinema history where more people went to see British films than they did American.

People in the States are told they can be the next President. Brits are told not to bother

So while I’m digressing somewhat, it’s fair to say that our relationship with comedic creations such as Brent is emblematic of Britain’s sensibilities. People in the States are told they can be the next President. Brits are told not to bother. It’s encouraging to take the former’s approach, there’s no denying that, but then you have a chancer like Donald Trump try their luck, and you can’t help but think: you know what, I wouldn’t have it any other way. Yes Brent is pathetic. He’s a sad little man who lusts after fame, accused – by his very creator – of mistaking popularity with respect. But he’s our sad little man, and that’s the whole point.