Twenty years ago this November, Toy Story was released. Yes, you read that correctly; Toy Story is twenty years old. One of the reasons we can’t quite comprehend that amount of time is because Toy Story is a timeless film; luckily, the animation studio behind it, Pixar, continued to work their magic for the next two decades. And even if the last five years has seen a bit of a dip for the studio, Inside Out looks to set the level straight again – and it got us thinking as to what it was that kept us going back to Pixar. This is a countdown of the moments that moved us the most.

Playing like a silent movie for its majority, WALL-E gets us inside the computer-chip mind of its titular hero. We expect this jolly little fellow to be an immovable centre of emotional safety, but part of what makes Pixar so special is knowing it can throw us totally off base, and more importantly, when to do so. A particularly heart-wrenching moment comes at the end of the film, when WALL-E and his ladybot friend EVE make it back to Earth, only for WALL-E to have returned to his original programming following a climactic fight for humanity’s home planet. His memory wiped, WALL-E goes straight to his day-to-day robotic business, totally ignoring EVE despite her best attempts at repairing him. It’s a moment we’re totally not ready for, witnessing a joyous personality we’ve bonded with through the entire movie be erased entirely. Of course, in true Disney-guided fashion, a robo-kiss from EVE jolts his circuits, and as his memory is restored, the two can enjoy their new Earth.

Sure, Jessie’s song [link] is perhaps the most tear-jerking sequence in Toy Story 2 (and possibly in all Pixar’s work), but the crucial moment during the big plane chase, where Jessie realises her inner worth, is equally resplendent with the feels. Assuring her that it’s the final episode of Woody’s Round-Up – a decades-old show that got cancelled before its resolution – the miniature cowboy Woody gives Jessie the perspective she needs to make that death-defying jump from the plane to the runway, and as a result, into an exciting, unknown future.

Monsters, Inc. is perhaps Pixar’s most cleverly written flick; its emotional beats are masterfully interwoven with a fast-moving mystery plot, explored through devices that could be found in the most high-brow science fiction. But if you take its smarts away, there’s a loudly beating heart at the centre of everything, revealed to blub-inducing effect in the movie’s final moments. Top scarer Sully is yearning for his semi-adopted human child, who he’s nicknamed ‘Boo’ (and ‘Kitty’ vice-versa) and has had to surrender to the earthly dimension. His best friend Sully, however, has restored the doorway that leads from the monster world to her room; upon opening the door, it’s a reunion that’s greeted by an excited exclamation and a joyful smile from either side.

Trust Pixar to destroy us in the first few minutes of their film. Finding Nemo begins with clownfish Marlin and his wife, Coral, setting up their new home in Australia’s Great Barrier Reef, with a dozen of their eggs in tow. Disaster soon strikes, however, when a barracuda suddenly attacks. Having been knocked unconscious, Marlin wakes to find Coral, and all his future children, gone – all except one. Naming him Nemo, he promises that he’ll never let anything happen to him. Director Andrew Stanton used this scene in an essential TED talk on storytelling, just to drive home Billy Wilder’s important screenwriting rule: Grab ’em by the throat, and never let ’em go.

Ratatouille is one of the most overlooked Pixar animations, but is up there with the studio’s best. Following Remy the rat, who can cook the finest food Paris has seen, who teams up with the hapless Chef Linguini who shares that dream, you’d expect the big emotional payoff of the movie to be with either of these two. Strangely, it’s with a character we barely know, and who appears late in the movie; the food critic Anton Ego, voiced by none other than Peter O’Toole. The instant he bites into Remy and Linguini’s ratatouille dish, he is immediately taken back to a dear childhood memory. The sequence, and his following speech, stand out as almost a standalone viginette from the main picture; it’s a testament to Pixar that experimentation can produce the most emotionally resonant results.

As if Toy Story 3 didn’t pay off fifteen years of build-up brilliantly enough with its enormously moving final ‘goodbye’ scene, it also tore us a new one with one of the most tense scenes of the past few years. When Woody, Buzz and friends are trapped in a furnace at a rubbish dump (which looks pretty similar to a place that begins with a capital H), they seem to be heading toward their imminent doom. Woody tries to get out, telling the others there’s still hope; Buzz extends his plastic astronaut hand to Woody, inviting him to accept his fate with the others. Closing his porcelain eyes, our favourite animated cowboy toy embraces death; this audacity from Pixar is what really elevates the studio above other animation houses, even Studio Ghibli. Mercifully, the heroes do escape thanks to one of the most applause-worthy deus ex machinas ever – but the scene will stay with you. 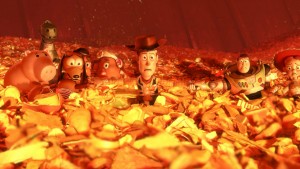 We didn’t want to show you a clip, as it would be too disturbing.

1. Up: Life flashing before our eyes

Like it was going to be anything else. The opening 10 minutes of Up were the final clause in the sentence, the cap on anyone still doubting Pixar’s mastery of animation. It remains an extraordinary example of what can be achieved with the form; in only a few fleeting moments, we watch Carl and Ellie Fredrickson meet, fall in love, get married, buy a house, start saving for their dream holiday, plan to have children / realise they can’t, use dream holiday money to pay for everyday things, enjoy later life with each other, and yet, keep planning to get away from it all. It’s so pertinent, so emotional, because it reminds us of all the dreams we have that we keep putting on hold. If every movie started like Up, the cinemas would be filled night and day.