Audiences have been eagerly awaiting Star Wars: The Force Awakens for over three years. Actually, you could argue that we’ve been waiting for The Force Awakens ever since The Phantom Menace disappointed almost a decade and a half ago. Just to get this out of the way, yes – The Force Awakens is better than any of the Star Wars prequels. Of course that’s kind of like saying Jurassic World is the best Jurassic Park sequel. It goes without saying. The real question is whether the film lives up to the original trilogy or the immeasurable hype?

Seeing how The Force Awakens may just be the most anticipated movie of all time, it’s probably impossible for director J.J. Abrams and company to please everyone. As far as I’m concerned, though, they’ve made a Star Wars movie that’s about as perfect as it gets. There’s zero doubt that almost everybody on the planet will buy a ticket during the film’s opening weekend. That won’t be the last time many of them see it in the theater, however. Even after The Force Awakens has left cinemas months from now, you can bet people are still going to be thinking and talking about it. This movie provides an experience that will stick with you, much like George Lucas’ initial classic did back in 1977. Only time can tell if The Force Awakens will rank up there with A New Hope and The Empire Strikes Back. For now, though, it’s everything one could ask for and, in some regards, even more.

Have you bought your BB-8 toy yet?

From its familiar opening text, The Force Awakens gives you chills all over and keeps you hooked until the credits role. The story, which Disney and Lucasfilm have gone to great lengths to keep under wraps, takes place decades after Return of the Jedi. Luke Skywalker is missing in action and the dark side lives on through the evil First Order. An army of Stormtroopers is lead by the mysterious Kylo Ren (Adam Driver), who is hellbent on finishing what the Empire started. The fate of the galaxy resides in a roly-poly droid known as BB-8, who, like R2-D2, manages to be incredibly emotive without a face or any dialog. BB-8 falls into the possession of a scavenger named Rey (Daisy Ridley) and a Storm Trooper gone rogue named Finn (John Boyega). From there, it’s a race to seek out the last remaining Jedi.

Abrams, along with fellow screenwriters Michael Arndt and Lawrence Kasdan, revisits many beats from previous Star Wars movies. Unlike Terminator Genisys, however, it never feels like they’re just rehashing an old plot. Rather, they make it feel like you’re hearing this story for the first time with clever dialog, strong atmosphere, and unforgettable characters. As a matter of fact, that’s exactly what the original Star Wars did. Lucas borrowed from countless other movies, stories, and legends to create a modern mythology. The Force Awakens continues that mythology in the best way possible. 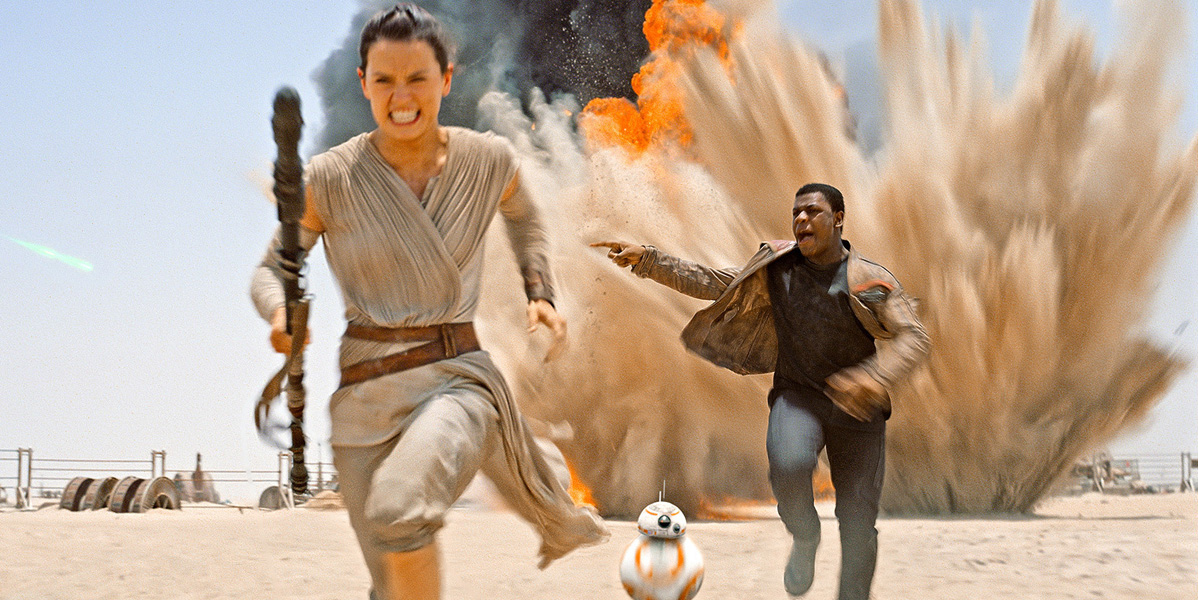 A few minutes in, you’ll be wondering where your favorite characters from the previous films are. Halfway through, however, you’ll completely forget that many fan favorites haven’t even shown up yet. That’s because the script does such a remarkable job of establishing the newcomers that take center stage, which also includes Oscar Isaac as a Resistance fighter named Poe Dameron. Rey, Finn, and Poe are immediately identifiable individuals that we want to follow. Sharing marvelous chemistry with one another, they’re brave, emotionally complex, and even quite funny. That’s right, there’s legitimate humor in this Star Wars movie and Jar Jar Binks is nowhere to be seen.

While the new crew is beyond endearing, the timeless characters from the original trilogy are also back and they all play key roles here. Seeing Princess/General Leia (Carrie Fisher), C-3PO (Anthony Daniels), and good old Chewbacca (Peter Mayhew) again feels like being reunited with friends you haven’t seen in ages. They all hit just the right notes, but it’s Harrison Ford as Han Solo who deserves Oscar consideration. Much like Sylvester Stallone in Creed, Ford brings even greater depth to his career-defining role as both a mentor and somebody that can still learn something from a new generation. Wouldn’t it be something seeing Han Solo going head to head with Rocky Balboa for this year’s Best Supporting Actor trophy? 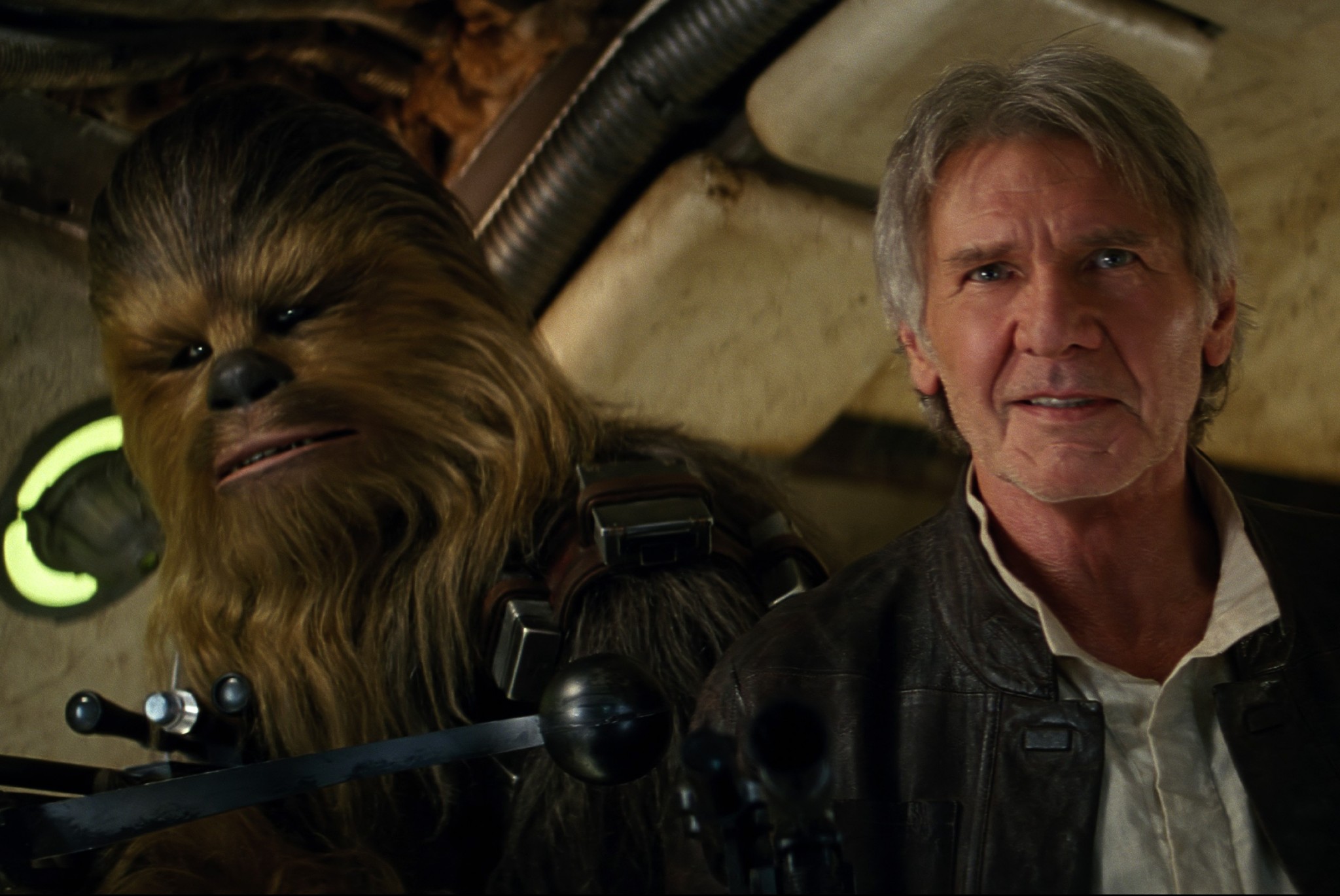 As for the action, it flat-out rocks. Abrams finds the perfect balance between practical effects and computer-generated imagery to deliver what may be the best-looking Star Wars picture ever. What makes the action so compelling is that there are characters we genuinely care about at the center. We want to see these people grow and live to fight another day. It not only makes for astounding entertainment, but powerful drama as well. 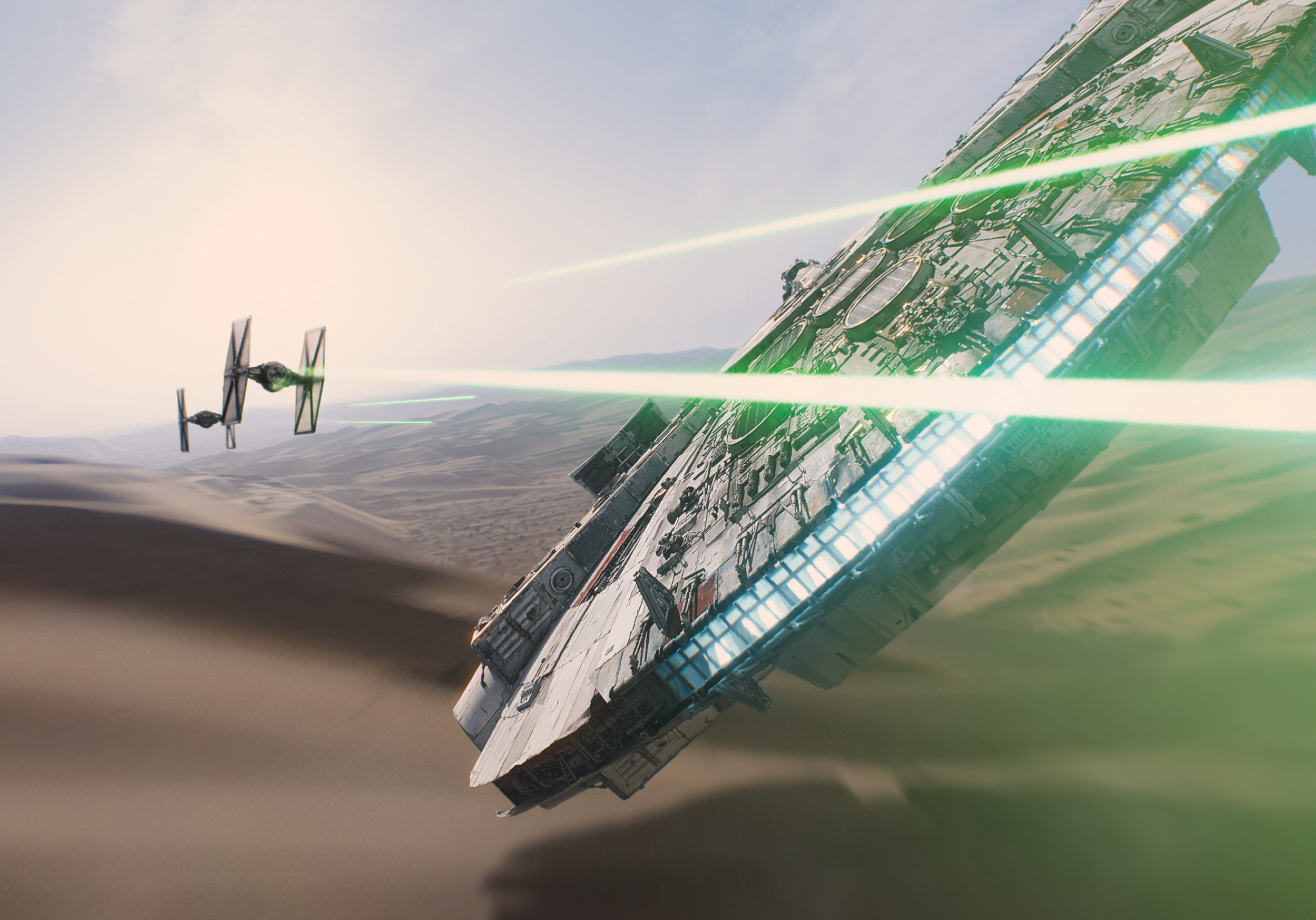 There are moments in The Force Awakens that will thrill you, others that will make you cry, and a couple of instances that may have you screaming, “NOOO!” It’s incredible just how many emotions the film conjures, but fortunately all of those emotions derive from a positive place. Everything about The Force Awakens feels like the Star Wars we know and love while also feeling like the beginning of a new golden age. Watching the movie, you don’t see the filmmakers trying to recapture the magic of the glory days. You see movie magic unfolding.

I will finish what you started.

There are still a few undeveloped characters and some plot threads that could be elaborated on, but that’s what we have sequels for. Where seeing Attack of the Clones and Revenge of the Sith almost felt like an obligation, The Force Awakens closes on a final note that will leave you excited for Episode VIII, IX, and additional adventures in this cinematic universe. In addition to the force being awakened, the film will also awaken something within any fan that grew up with Star Wars: the sense of being a kid again. 2015 has brought us a number of movies that have hit us hard on a nostalgic front. Star Wars: The Force Awakens just might be the finest example. At the risk of sounding cliché, the force is strong with this one, very strong.