Sony’s big screen adaptation of Stephen King’s The Dark Tower narrowly beat Dunkirk at the US box office. The critically panned film made $19.5 million in its opening weekend to take the top spot.

Following poor reviews and with a budget of $65 million, it’s a solid start for Nikolaj Arcel’s latest endeavour. Christopher Nolan’s World War II film Dunkirk dropped to second place but continued to impress with $17.6 million in its third week. The Emoji Movie fell to third, while Halle Berry’s Kidnap debuted in fifth.

See the top 10 below via Box Office Mojo: 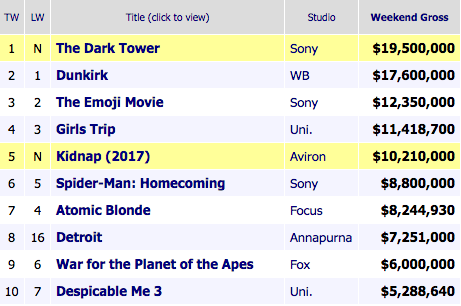