Despicable Me 3 saw off competition from Edgar Wright’s Baby Driver to win the weekend’s US box office.

Illumination and Universal’s popular animation opened to $75.4 million in the states, soaring past Baby Driver in second place, which made $21 million on its debut, which is still certainly not bad for the action-packed thriller.

Meanwhile, Transformers: The Last Knight dropped to third place, earning $17 million in its second weekend, a big drop for the fifth film in the franchise. It’s also not great news for Will Ferrell’s new release The House, which opened at number six with just $9 million. See the full top 10 below via Box Office Mojo: 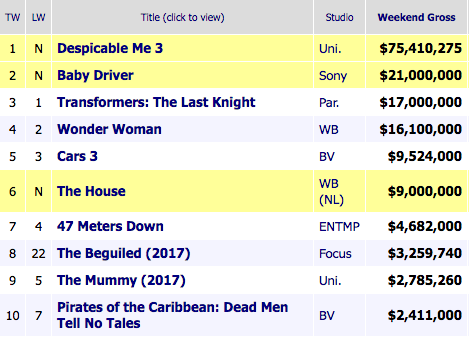 Despicable Me 3 took top spot comfortably but how does it compare to previous films of the franchise? Well it’s some way of 2015’s Minions which takes the crown with a $116 million domestic opening. And it’s narrowly behind Despicable Me 2 but ahead of the first film, so not bad for a fourth outing.

Spider-Man: Homecoming looks set to swing to the top of the box office next weekend though.